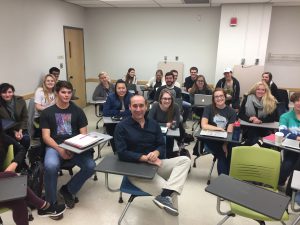 During the Fall 2016 semester, the University of Wisconsin-Madison hosted noted journalist and author Thierry Cruvellier as a visiting lecturer. Mr. Cruvellier has spent much of his career covering war crimes trials and has attended all of the international tribunals of the post-Cold War era. He was a Nieman Fellow at Harvard University in 2003-04, and has a master’s degree in Journalism from the University of Paris – Sorbonne. Mr. Cruvellier served as a Reporters Without Borders representative in the Great Lakes Region of Africa in 1994-95 and is a former editor of the online newsletter International Justice Tribune. He has written two books, one on the Rwandan genocide tribunals and the other on the Khmer Rouge in Cambodia. His most recent work, soon to be his third book, is focused on Sierra Leone.

Mr. Cruvellier has been involved in many events and activities on campus this fall including giving lectures at the African Studies Program and the Center for Southeast Asian Studies and as the keynote speaker for the IRIS Fall Welcome Event. He also guest-lectured in courses in the Department of Political Science and the Law School, contributed to workshops at the School of Journalism and the Law School, and participated in Middleton High School’s Human Rights Week by speaking to Middleton students about war crimes trials and transitional justice. 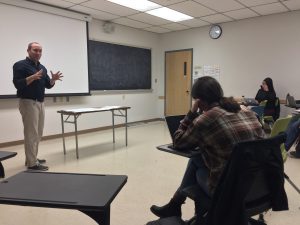 The highlight of the semester for Mr. Cruvellier was his course, International Studies 601, titled “International Criminal Justice: Models and Practice.” The focus of the course was the conflicts and human rights tragedies in Cambodia, Chad, Rwanda, the former Yugoslavia, and Sierra Leone. Mr. Cruvellier said the course was not easy, noting the substantial readings and the density of the issues and that “realizing the harsh realities of international justice at work can sometimes be difficult because it is questioning our ideals.” He was impressed with the twenty-two students in the class and how they “bravely hung on, facing the challenge while resisting the trappings of disillusion, I hope.” The course was also an opportunity for him to engage with the material and students in a new way. “It was humbling for me to try and share all these experiences, and it was also exciting and sometimes enlightening to have their feedback and reactions.” While the course and his other commitments did not leave him much time for his own research, he said his experience “has been delightful” and that “[i]t was fulfilling to share with such different audiences” and “a way to give back what I have received.” 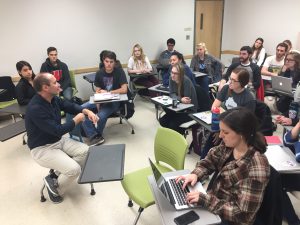