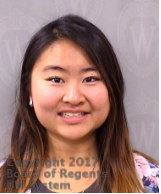 Michelle Lam is a current Junior majoring in International Studies, with a focus on Global Politics and Economy. Michelle was born in Hong Kong, but her family immigrated to Eau Claire, Wisconsin when she was 5 years old. While originally planning to become a doctor, Michelle instead decided to major in International Studies as she realized her passion to understand global ties and the positive and negative impacts of political economy on the daily lives’ of regular people.
International Studies 101 was what first sparked her interest in International Studies and pushed her to declare her major with the IS department, while still pursuing a pre-medical track. However, with her participation in the Taiwan-America Student Conference during Summer 2016, she realized her devotion to International Studies. Consisting of 20 American delegates, and 20 Taiwanese delegates, the conference facilitated the discussion on current issues in Education, Media, Environment, Trans-Pacific Affairs, and Education in today’s world. Both a fun and educating experience, Michelle now has cherished relationships with students ranging from across the U.S. to Taiwan. Wanting to pursue more international and cross cultural experiences, Michelle decided to drop the pre-med track to study abroad in London during Spring 2017 and participate in the Wisconsin in Washington D.C. program during Spring 2018. Currently studying abroad at the University of Westminster in London, she is already gaining different perspectives of the United States’ role in World Affairs, especially International Law and Politics. As people of all backgrounds study in London, their narratives have provided insight into the dominant role of the U.S. in International Relations, its resulting positive and negative consequences and oppositions. She is particularly interested in the Middle East and Southeast Asia and will continue to take Economics and Politics courses focused on these areas.
With graduation looming next year, Michelle plans to head out to Washington, D.C. to pursue graduate school, or a career with a think tank or in public policy. Ideally, she would like to pursue a job that will allow her to continue to study and learn International Affairs. No concrete plans have been made, however, and she is willing to keep an open mind to various opportunities that come her way. 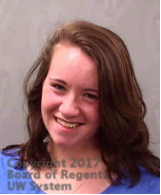 My name is Emma DeLaney Strenski and I am from Indianapolis, Indiana. I graduated from St. Thomas Aquinas School in 2010 and from Brebeuf Jesuit Preparatory School in 2014. It was at Brebeuf, in a class called Genocide and Holocaust, that International Studies first caught my attention. My teacher, Mr. Tague, introduced me to the study of other cultures in times of extreme, unthinkable violence. I would like to especially thank him for that. Ever since I took that class, I knew that I wanted to focus my future studies on the history of genocide, the politics of war, and foreign policy measures.
At the University of Wisconsin-Madison, I have taken classes geared toward this end goal, including classes on the Holocaust, World War II, Vietnam and Cambodia, US Foreign Policy, and US CIA Covert Warfare. These courses within the International Studies and History departments on campus have helped me gain a vast, diverse knowledge of conflict and resolution in modern history. This will culminate in my senior thesis, entitled “Preserving the Dayton Peace Accords with the Brcko Arbitration.” In this thesis project, I will trace the international arbitration and decision about Brcko, made under the Dayton Peace Accords, in order to examine America’s stances on human rights and individual sovereignty in the late twentieth century. I hope to explain the American approach to arbitrating multiethnic spaces using the case of Brcko, Bosnia as compared to other American interventions in the twentieth century.
The International Studies Major and my internship with the Columbia Support Network has helped me to channel my passion and interest in Latin America into preparation for a profession. In the future, I plan to use what I have learned about Latin America in my International Studies classes in the Peace Corps and law school. Immediately following my graduation in May of 2018, I hope to enter the Peace Corps for a two-year post teaching English as a second language to kids in Latin America. After completing a two-year tour in the Peace Corps, I intend to apply to the Georgetown University Law School. I will pursue a law degree with a certificate in Refugees & Humanitarian Emergencies. I want to learn about the law behind international human rights, the way it works, and how effective it is as a whole. I want to learn as much on the subject as possible, to best prepare me for a career in the field.
In short, what I have learned from my internship and my International Studies classes has influenced what I want to do with my life. This major program has helped to shape my future. I would probably be doing something completely different, perhaps something I would not be as passionate about, if I were not involved in the International Studies Major.